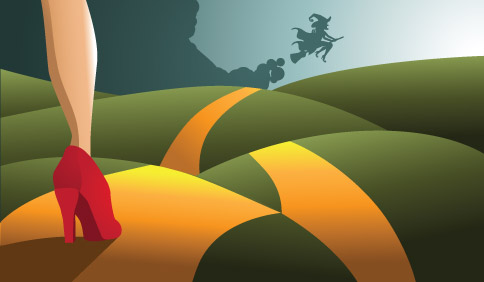 Is Dorothy’s adventure an acid trip? This has long been debated in popular culture and completely denied by the movie creators.

L. Frank Baum’s original story The Wonderful Wizard of Oz was first published in 1900 and written during a time when opium was legal. Opium is a narcotic that is derived from poppies. A quote from L. Frank Baum’s novel that references these poppies,

“They now came upon more and more of the big scarlet poppies, and fewer and fewer of the other flowers; and soon they found themselves in the midst of a great meadow of poppies. Now it is well known that when there are many of these flowers together their odor is so powerful that anyone who breathes it falls asleep, and if the sleeper is not carried away from the scent of the flowers, he sleeps on and on forever. But Dorothy did not know this, nor could she get away from the bright red flowers that were everywhere about; so presently her eyes grew heavy and she felt she must sit down to rest and to sleep”.

Dorothy is sidetracked from her path to The Emerald City by these beautiful flowers. The opium produced by poppies can lead to sleep and death. Some say, the poppy field represents a warning regarding the dangers of being preoccupied by something that is exceptionally alluring because it may have a hidden danger.

Whether The Wonderful Wizard of Oz purposefully added opium references to the story, the debate demonstrates how deeply drugs and addiction is imbedded in our culture. Addiction is a significant, meaningful problem and struggle in our society, talked about in books, music and in film as we try to make sense of the problem that affects and grabs hold of so many.